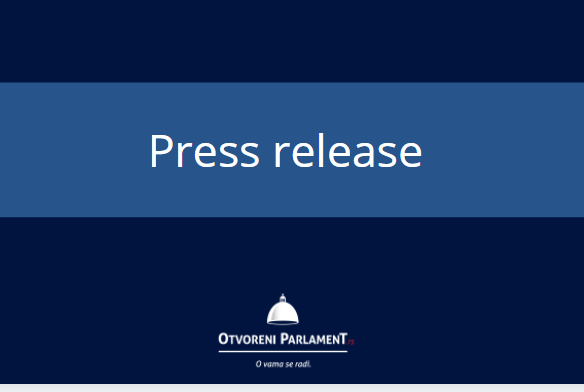 The Open Parliament demands the withdrawal of the draft Code of Conduct for MPs from the procedure because it threatens to become another means of settling scores with political dissidents, instead of an instrument that would strengthen parliamentary integrity, rule of law and citizens’ trust. If such a text of the Code is adopted, it will not serve the fight against corruption and protection of the public interest.

An analysis of the current draft Code, carried out by the CRTA’s Open Parliament initiative team, shows that there is a lack of compliance with international standards in comparison to the 2014 draft, as well as that key provisions that would contribute to the substantial implementation of the Code and change the MPs’ behaviour have been omitted.

In relation to the draft from 2014, the one that has entered the parliamentary procedure now does not envisage that the Ethics Council, a body consisting of MPs from several committees and at least one representative of the opposition, be responsible for the implementation of the Code, but it is now proposed that the Administrative Committee be in charge of it. Moreover, the possibility is introduced that the complainant will be liable for a violation of the Code, if the Committee finds that the application is unfounded and aimed at political discrediting of another MP. The criteria for determining unfoundedness and intent to discredit a politician remain undefined, leaving room for discretionary interpretation and abuse in order to deal with political opponents. In the draft that is on the agenda from today on, the punishment in the form of a public apology made by an MP was excluded, as well as the obligation to inform the public about the decisions and penalties at the plenary session.

It remains unknown how this version of the Code lost exactly what were the standards of international organisations with which Serbia cooperates, such as the OSCE and the Council of Europe, and it is not known when and how the Working Group changed the draft from 2014 nor whom it consulted.

The Open Parliament Initiative, launched by the CRTA in 2012, collects and publishes data on the activities of MPs, the activities and results of the work of the National Assembly and deals with analyses of various processes from the perspective of transparency, accountability and participation.