WHATEVER IS ON THE AGENDA, THE MPS ARE TALKING ABOUT PRESIDENT VUČIĆ 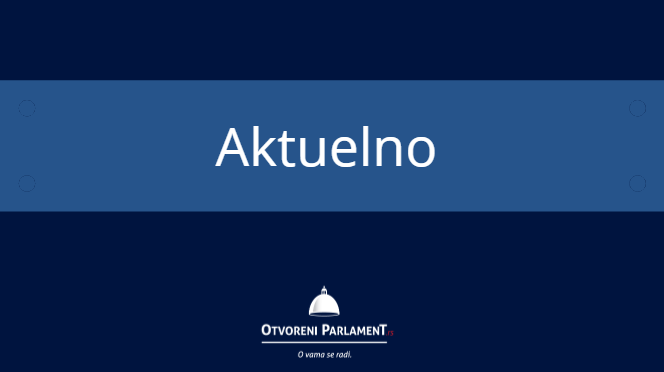 Judging by the new Assembly convocation, an analyst might think that there are two parties in the Serbian Parliament with a similar number of MPs, one led by Aleksandar Vučić and the other by Dragan Đilas. The unusual behaviour and discussion in this composition of the Serbian Parliament can be seen from the results of the analysis of the Open Parliament, which shows that, without competition, the President of Serbia and the President of the ruling Serbian Progressive Party Aleksandar Vučić was mentioned most often in 2020, followed by the leader of the extra-parliamentary Party of Freedom and Justice Dragan Đilas. Vučić’s name often stood together with a syntagm “thanks to Vučić and his wise policy” Serbia achieved some success. On the other hand, Đilas’s name was most often accompanied with words “tycoon” and alleged “619 million euros that he stole from citizens”.  The additional fact that the speakers of the Parliament missed each of the almost two thousand opportunities to interrupt the addressers and say that Vučić and Đilas were not the topic of the session, tells us that it was just the opposite. At least in recent months, the Parliament has mostly served as a training ground for the election campaign and for confrontation with dissidents who are not even present.

And not just with politicians. We noted that in eleven sittings – nine ordinary and two special ones, other individuals were mentioned, too, although they did not have anything to do with topics of these sittings, nor with the work of the Parliament. We analysed the extent to which MPs in the period from October 22nd to December 29th mentioned various political actors, but also persons who do not participate in the political life of Serbia at all, the media, non-governmental organisations, public figures and others.

The entire autumn session was dedicated to the President of Serbia

During the first five months of the new twelfth parliamentary convocation, Vučić was mentioned as many as 1,604 times, although none of the laws being discussed referred to the duties of the President or anything that would be in his direct competence. Dragan Đilas closely follows as he was talked about as many as 1,030 times, although his Party of Freedom and Justice boycotted the previous parliamentary elections. Apart from rare public opinion polls, this party’s rating has never been measured. Also, during the previous regime, Đilas was the mayor of Belgrade, and not the president or prime minister responsible for the state of the entire country. However, MPs mentioned Đilas twice as often as their own Serbian Progressive Party (659 times), and then the President of Serbia without saying his name (590 times). All the others were far less interesting, but it is thought-provoking that non-governmental organisations were mentioned 99 times, independent television N1 97 times, while MEP Tanja Fajon was mentioned as many as 29 times (Chart 1). When it comes to the media, non-governmental organisations and even representatives of Europe, the MPs most often addressed them in an imaginary dialogue, presenting criticism and even accusations to which they do not expect answers.

Chart 1: Number of mentions of various political actors and expressions in the autumn session

“Thank you, President, that I am an MP”

Aleksandar Vučić was most often, as many as 340 times mentioned at the first constitutive session of the Assembly of Serbia in the Twelfth Convocation. The new MPs were beginning their speeches by expressing gratitude to the President of Serbia and the Serbian Progressive Party, Aleksandar Vučić, for giving them the confidence to be where they are, especially because the biographies of young people from the list “Aleksandar Vučić – For Our Children” show that many of them were elected without any work or political experience. At the fourth sitting, when the set of laws on taxes was discussed, Vučić was mentioned 239 times, 201 times when digital property and fiscalisation were discussed, and 197 times when MPs discussed the budget for 2021. (Chart 2).

Chart 2: Number of mentions of Aleksandar Vučić per sitting

The leader of the opposition is a tycoon and a thief

The sitting devoted to annual reports and financial plans of independent bodies and institutions was an opportunity for the name of Dragan Đilas to be heard as many as 265 times and to be remembered by hate speech. Đilas was then called “the big brother of all financial embezzlements in the Republic of Serbia”, and his brother Gojko Đilas who the public had never heard of before and who was not involved in politics or public affairs, was also attacked by parliamentary critics. As the MP Sandra Božić, who also happens to be the President of the Parliamentary Culture and Information Committee, said, she showed the photo of Gojko Đilas to the public because citizens knew what President Vučić’s brother looked like, what Prime Minister Ana Brnabić’s brother looked like, so she thought it should be known what one of the opposition leaders’ brother looked like. In those days, MPs reiterated the calls to the authorities to determine how much real estate property Dragan Đilas’s brother had, how he had acquired it, but they did not inform the public whether the investigative bodies had ever replied.  At a sitting at which the work of independent institutions such as the Fiscal Council or the Anti-Corruption Agency should have been brought closer to the citizens, the owner of one of the few independent media houses in Serbia, Dragan Šolak, was criticized, together with Tanja Fajon from whom it was demanded to explain first of all “in whose villa in Ljubljana her party was headquartered”. The Open Parliament published some of the most striking examples of hate speech on its Twitter account. The statements of the Serbian Progressive Party MP Biljana Pantić Pilja that the independent media, N1 and Nova S “can be described by only one sentence – a domestic traitor, a foreign mercenary”, attracted the most public attention.

Talking about Đilas, MPs not only presented him as a current opposition leader claiming that he “had bought” good part of the opposition activists, but also as a symbol of the former regime. When the MPs discussed the budget for 2021, they mentioned Đilas 223 times, and especially his now legendary “619 million that Đilas put on the accounts of his private companies while he was leading the city of Belgrade”.

Chart 3: Number of mentions of Dragan Đilas per sitting

In the end, there was a situation where some people were mentioned only once, but because of their popularity or especially unpleasant tone, the mention had extremely strong repercussions. For days, the public commented that the MP of the Serbian Progressive Party, Marko Atlagić, had accused the famous Serbian actress Seka Sablić of lack of patriotism, responding to one of her interviews in which she criticized the situation in Serbia. The same MP called on one of the most popular actors in Serbia, Dragan Bjelogrlić to move out of the country because, as he claimed, he had promised that he would leave the country if the protests called “One in five million”, which lasted for some time against Vučić’s regime, failed.