MARIJANA SAVIĆ (NGO “ATINA”): GENDER EQUALITY IS NOT CONSTITUTED ON A 40 PERCENT QUOTA OF FEMALE MPS 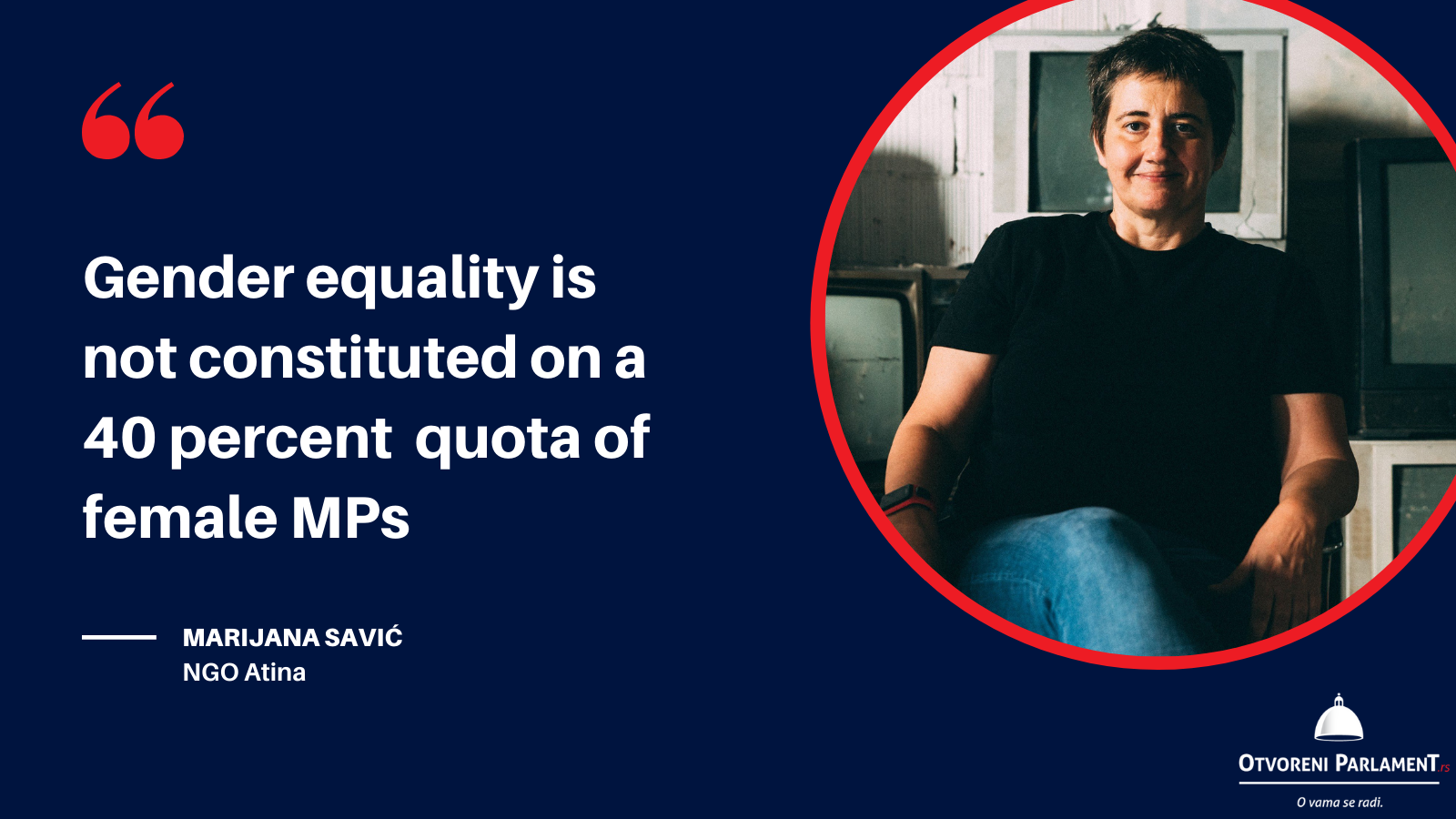 “There will be no progress in the state of human rights in any area, in the economy or economics, until Chapters 23 and 24 are taken seriously in Serbia, as fundamental values that we advocate in the negotiations with the European Union, more precisely, until the situation in the judiciary will have been regulated. Personally, I do not believe in the sincere intentions of the Serbian Parliament to improve the position of women in society, but I do believe that the dialogue with the legislator should continue,” said for the Open Parliament Marijana Savić, director of the NGO “Atina”, an organisation that advocates equal treatment of all male and female members of society.

OP: When, as someone who comes from the non-governmental sector and deals with human rights and the position of women, you hear that the Women’s Parliamentary Network met in the Assembly last week and came to some conclusions, does that news matter to you?

MS:  No, it doesn’t, that news really has no weight because there is no trust in the Parliament. What should be first gained, it is confidence in that political institution, as well as in all institutions that should implement laws and policies. That trust was lost many years ago and serious steps are really needed to re-gain it. We really need a partnership with all participants in society who are interested in certain topics, followed by the implementation of everything that has been adopted and done so far. Institutions should show determination, they should stop the bad practice of relativisation, not only of violence, but of also other important topics that concern all citizens. Poverty is just one of those topics. It must be noted that the fundamental diseases of our society, and persistent barriers such as corruption and nepotism also affect the inequality of women.

OP: You have mentioned relativisation. After the conference, the message of the president of the Women’s Parliamentary Network, Sandra Božić, was that we should not talk about “violence against women” because a woman is reduced to the position of an object, but that we should adopt the expression “violence towards women”. Is this important?

MS: This is an example of the relativisation of everything that happens to women every day. It is a classical denialism repertoire. Let’s ask women who suffer violence whether it is more important for them to use the preposition “against” or “towards”, or to receive support, certainty, understanding and help. Such “linguistic dilemmas” are there to divert the dialogue, which does not exist anyway, to some unimportant topics, without talking about the essence. This topic should not be taken lightly.

OP: We have heard several times from officials that women in Serbia are institutionally protected, but that this was not enough. Yet, it commendable that there are 40 percent of female MPs who have seats in the Assembly and who make decisions. As the Prime Minister Ana Brnabić recently emphasised, the number of women who are the head of cities and municipalities increased. Is it a possible path towards the improvement of women’s position in society?

MS: No, it isn’t. Gender or any other type equality is not a number that should be reached or a quota that should be achieved. It should actually be the belief that all male and female citizens living in this country are equal and the desire to annihilate all places of inequality. It is a deep conviction that all lines of discrimination should be erased and the ways in which we will all participate in decision-making should be affirmed. We can see here that it is not affirmed, because making decisions means being transparent and accountable for the adopted solutions. Enabling citizens to participate in decision-making processes, informing them and enabling them to be informed, all this represents the basis and foundation for equality. The fact that there will be 40 or 60 percent of female MPs who got seats in the Assembly by someone’s decision, doesn’t mean much.

OP: Does that mean that not much can be expected from the newly re-announced Law on Gender Equality?

MS: We do not expect changes for the better. Something extraordinary should really happen in order to restore at least the expectation that the law will be implemented. Given the way this version is being drafted and the extent to which interested parties are being consulted, nothing indicates that it will be different than before.

OP: Do you remember any example when the legislator listened to some recommendations of the non-governmental sector? Do they consult you?

MS: It is one thing to consult and another to accept the experience of organisations, civil society, academic institutions or institutions at the local level that face various problems on a daily basis. When we talk about gender equality, violence or social policy, or about situations in which victims of domestic violence or human trafficking find themselves, laws are mostly created from the top. A working group composed of people who do not have experience in dealing with this problem is formed, and the experiences of those who deal with it authentically are not taken into account. I do not believe that we will get a new instrument by law that is supposed to help us monitor what the state is doing on that issue. However, NGO “Atina”, as well as a number of other women’s and feminist organisations, participates in all discussions about solutions concerning women and girls, their economic position. We are working to promote a better social position of women because it is the only way for them to regain control over their lives and to fight for equality.

OP: Therefore, we should by all means participate in talks with legislators?

MS: All this reminds us how important it is to defend the state from the authorities. It has become a great threat, to playact a dialogue, to obtain legitimacy from the civil sector and then to continue as if nothing had ever been agreed. Until responsibility is assumed and consequences borne, there can be no progress. Also, there will be no economic progress or gender equality if we do not make decisions to close Chapters 23 and 24 in the EU accession, which refer to the rule of law. There will be no progress until people understand the correlation between the rule of law and an independent judiciary, a strong fight against corruption and organised crime, a public administration and police reform. Without that, we can’t go anywhere.